Should I consider counter-offers?

A raise won’t permanently cushion thorns in the nest

Mathew Henry, the 17th-century writer said, “Many a dangerous temptation comes to us in fine gay colors that are but skin deep.” The same can be said for counter-offers, those magnetic enticements designed to lure you back into the nest after you’ve decided it’s time to fly away.

The litany of horror stories I have come across in my years as an executive recruiter, consultant and publisher, provided a litmus test that clearly indicates counter-offers should never be accepted…EVER!

I define a counter-offer simply as an inducement from your current employer to get you to stay after you’ve announced your intention to take another job. We’re not talking about those instances when you received an offer but don’t tell your boss. Nor are we discussing offers that you never intended to take, yet tell your employer about anyway as a “they-want -me-but-I’m-staying-with-you” ploy.

“During the past 20 years, I have seen only isolated incidents in which an accepted counter-offer has worked to the benefit of the employee.”

These are merely astute positioning tactics you may choose to use to reinforce your worth by letting your boss know you have other options. Mention of a true counter-offer, however, carries an actual threat to quit.

Interviews with employers who make counter-offers, and employees who accept them, have shown that as tempting as they may be, acceptance may cause career suicide. During the past 20 years, I have seen only isolated incidents in which an accepted counter-offer has benefited the employee. Consider the problem in its proper perspective.

What really goes through a boss’s mind when someone quits?

“This couldn’t be happening at a worse time.”

“This is one of my best people. If I let him quit now, it’ll wreak havoc on the morale of the department.”

“I’ve already got one opening in my department. I don’t need another right now.”

“This will probably screw up the entire vacation schedule.”

“If I lose another good employee, the company might decide to lose me too.”

“My review is coming up and this will make me look bad.”

“Maybe I can keep him on until I find a suitable replacement.”

What will the boss say to keep you in the nest? Some of these comments are common.

“I’m really shocked. I thought you were as happy with us as we are with you. Let’s discuss it before you make your final decision.”

“Aw gee, I’ve been meaning to tell you about the great plans we have for you, but it’s been confidential until now.”

“The V.P. has you in mind for some exciting and expanding responsibilities.”

“Your raise was scheduled to go into effect next quarter, but we’ll make it effective immediately.”

“You’re going to work for who?” 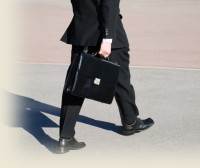 Let’s face it. When someone quits, it’s a direct reflection on the boss. Unless you’re really incompetent or a destructive thorn in his side, the boss might look bad by “allowing” you to go. His gut reaction is to do what has to be done to keep you from leaving until he’s ready. That’s human nature. Unfortunately, it’s also human nature to want to stay unless your work life is abject misery. Career changes, like all ventures into the unknown, are tough. That’s why bosses know they can usually keep you around by pressing the right buttons. Before you succumb to a tempting counter-offer, consider these universal truths:

If the urge to accept a counter-offer hits you, keep on cleaning out your desk as you count your blessings.

How do I know if this is really the right position fit for me?

How do I handle questions about compensation?